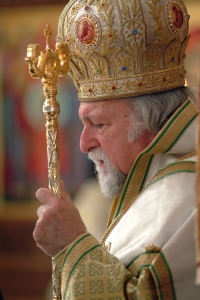 Metropolitan Isaiah is a native of Portsmouth, New Hampshire. He is one of four children born to Dennis and Mary (Kapsimalis) Chronopoulos, who had emigrated to the United states from Olympia, Greece. After his primary and high school education, he served with distinction in the United States Marine Corps during the Korean conflict. In the autumn of 1954 he enrolled at Holy Cross Greek Orthodox Seminary in Brookline, Massachusetts. Upon his graduation in 1960, he attended the Ecumenical Patriarchate Seminary of Halki in Istanbul, Turkey for graduate studies.

On February 25, 1962 Metropolitan Isaiah was ordained a deacon by His Eminence Archbishop Iakovos at Saint Spyridon Church in San Diego, California, having been tonsured a monk on the previous day. He received his ordination to the holy priesthood from His Grace Bishop Demetrios of Olympos at Saint Sophia Cathedral in Los Angeles, California, on March 18, 1962. His first assignment in the Greek Orthodox Archdiocese was as assistant to the pastor at Holy Trinity Church in Salt Lake City, Utah. In December of 1964, he was assigned as pastor at Saint John the Baptist Church in Youngstown, Ohio. On November 30, 1969 he was raised to the office of Archimandrite by Archbishop Iakovos at the consecration services of the new church and community center in Youngstown.

Archbishop Iakovos reassigned the Metropolitan to Hellenic College and Holy Cross School of Theology as the Director of Student Life in August of 1971. Taking a leave of absence from his duties in February 1975, he enrolled as a graduate student at the School of Theology at the University of Thessaloniki, fulfilling requirements for the recognition of his master’s degree in theology. He returned to the United States in July of that year and continued in his capacity as dean of students.

In September 1976 he was given additional responsibilities at the college-seminary as the Dean of Administrative Affairs together with his position as Dean of Students. In October 1977 he assumed additional duties as the Interim Pastor at Saint Nicholas Church in Portsmouth, New Hampshire. Relinquishing all of these positions in March 1979, he was assigned as the Chancellor of the Diocese of Chicago under His Grace, Bishop Iakovos of Chicago.

Metropolitan Isaiah was elected to the rank of bishop by the Holy Synod of the Ecumenical Patriarchate in Istanbul (Constantinople), Turkey on April 10, 1986. He was consecrated a Bishop on May 25, 1986 at Holy Trinity Cathedral in New York City, and was given the title of Bishop of Aspendos, a former Christian city in southwestern Asia Minor. In September 1986, His Eminence Archbishop Iakovos assigned him as the Chancellor of the Archdiocese in New York. Bishop Isaiah continued to function in this capacity until June 23, 1992 when he was elected Bishop of the Diocese of Denver by the Ecumenical Patriarchate, taking the new title on June 24, 1992 at special ceremonies in the Archdiocesan Chapel. He was enthroned as Bishop of Denver on September 10, 1992, at the Greek Orthodox Cathedral of the Assumption of the Virgin Mary in Denver, Colorado.

On November 24, 1997 the Holy and Sacred Synod of the Ecumenical Patriarchate elevated him as Metropolitan of Proikonisos and Presiding Hierarch of the Greek Orthodox Diocese of Denver. Metropolitan Isaiah was also appointed as President of Hellenic College/Holy Cross Greek Orthodox School of Theology on July 1, 1997 by His Eminence Archbishop Spyridon of America. He accepted a one-year term which officially ended on August 14, 1998.

On December 20, 2002 the Ecumenical Patriarchate elevated the status of the Diocese to a Metropolis, and in 2003 elected Metropolitan Isaiah as Metropolitan of Denver.